This page describes the historical ITDK release 2021-03, which consists of

The IPv4 router-level topology is derived from aliases resolved with MIDAR and iffinder, which yield the highest confidence aliases with very low false positives. The router-level topology is provided in two files, one giving the nodes and another giving the links. There are additional files that assign ASes to each node, provide the geographic location of each node, and provide the DNS name of each observed interface.

The node-AS file assigns an AS to each node found in the nodes file. We use our final bdrmapIT and Hoiho assignment heuristic to infer the owner AS of each node.

The node-geolocation file contains the geographic location for each node in the nodes file. We use the Hoiho, IXP, and MaxMind's GeoLite City database in that order. 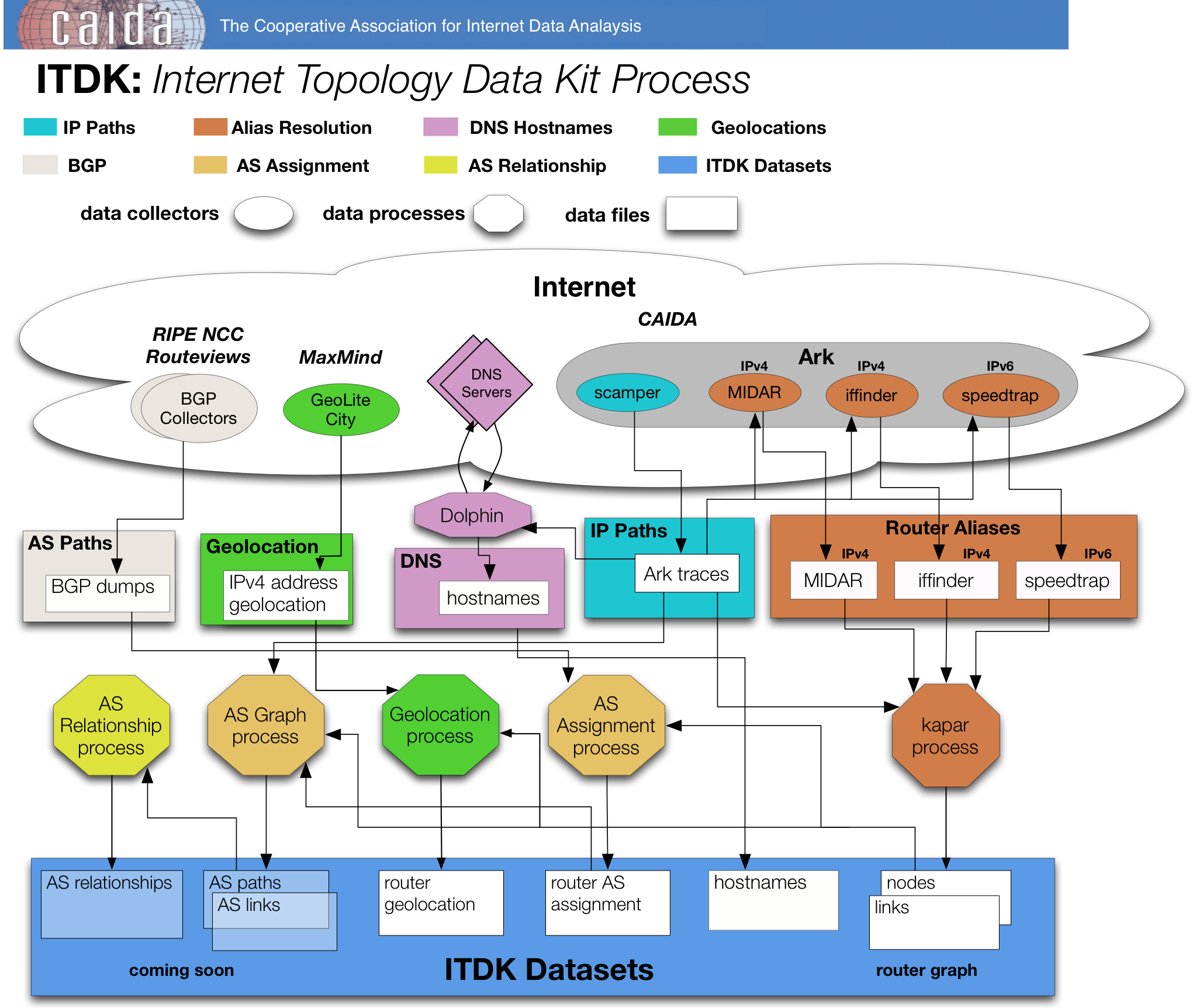 For alias resolution, we rely on several CAIDA tools: iffinder and MIDAR (recent tech report). MIDAR (Monotonic ID-based Alias Resolution, a tool we hope to release soon) expands on the IP velocity techniques of RadarGun. We use the traceroute dataset as input to MIDAR and iffinder to infer which interfaces belong to the same router, and the set of two or more routers on the same IP link (a construct that represents either a point-to-point link, or LAN or cloud with multiple attached IP addresses). We use iffinder, and MIDAR to construct IPv4 topologies.

bdrmapIT combines the AS inference heuristics found in both bdrmap and MAP-IT. By synthesis of these two techniques, bdrmapIT is designed to accurately identify interdomain links in a traceroute dataset using a graph refinement strategy. Our algorithm proceeds as follows:

Hoiho uses inital router to AS assignment inferences from bdrmapIT combined with DNS hostnames to create a set of rules which can extract AS annotations recorded by network operators in hostnames. Those rules are then used to add an additional refinement to bdrmapIT's initial assignment. For further details, please see the papers bdrmap: Inference of Borders Between IP Networks, MAP-IT: Multipass Accurate Passive Inferences from Traceroute, and Learning to Extract and Use ASNs in Hostnames.

We use a combination of publicly known Internet eXchange (IX) point information, Hoiho hostname mapping, and MaxMind's free GeoLite City database to provide the geographic location (at city granularity) of routers in the router-level graph.

We then collect the hostnames for interfaces on routers that are not geolocated to an IX. These hostnames are then mapped to geographic locations using Hoiho's heuristics.